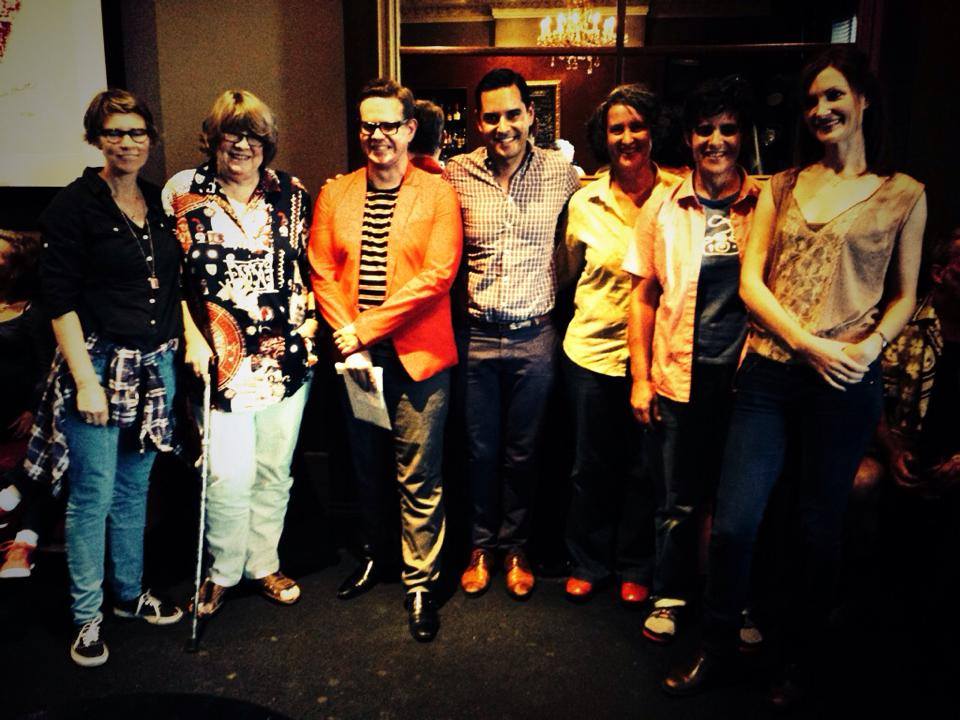 We were delighted to receive 94 stories from all round Australia and from NZ, and that the standard of writing was so high this year. Judges had a difficult task in choosing the winning stories. We also feel that if we had the means to do it, many more of the stories submitted could sit alongside the winners in a book of lgbtqi writing. We were also exceptionally pleased that transgender, bisexual, and intersex themes frequently highlighted our diversity.

We gathered up some amazing prizes.  Thousands of dollars in cash, a Kindle, gift vouchers, even Mardi Gras Party tickets! Community organisations such as NSW Writers Centre, The Pop Shop, The Bookshop Darlinghurst and LINC  have also generously supported us.

The women of the committee, Gail Hewison and Teresa Savage

It takes a special skill to write a short story and bring it to completion in 750 words. As with poetry, not a word can be wasted. We feel the finalists in the competition all did this well. We found stories that were entertaining, insightful, surprising, emotionally raw and real. Issues important to us all were laid bare without preaching. We loved the way After The Summer appeared in so many imaginative ways. Many writers appeared to open their hearts to us, perhaps drawing on their own experiences, and we were moved and felt privileged. As queer judges we felt right at home, our lives as well as yours!

Someone once said that the heart and soul of a community resides in its creative people. This certainly includes our writers, who in telling their stories show us who we are. The importance of this competition is that it makes a space for our voices to be heard.

We hope all our writers will stay in touch, keep writing, and enjoy being a part of this LGBTIQ creative community. We congratulate the winning writers.

The winners of the 2013 OutStanding LGBTQI short story competition were;

Alex Greenwich with the men of the committee, Laurin McKinnon, Robert Tait and Rowan Savage

Congratulations to all these writers

Gail Hewison, proprietor of The Feminist Bookshop 1982 – 2011, OAM in 2006 for services to community and to emerging authors, with long term interest in supporting and reading queer poets and writers.

Robert Tait, author of Perfect Gay Marriage, Trashtown and Mardi Gras The Novel, and is a long-standing member of Sydney’s Queerlit community.

And our mascot, JonJon, the rescue greyhound

Sincere thanks are due to our generous sponsors  for their  fabulous prizes and money, as the competition has gone over the top this year with 98 stories received, approximately twice as many as last year!

First of all the judges would like to say many thanks and congratulations to every story-teller who entered. Reading all the stories was a pleasure, choosing a short list was a difficult task in the face of so much talent and originality. As you will all be aware the judges read all stories with no identification details, and did not hear the names of the winning writers until  the awards event.

Our “Heroes” came in many guises, we had Mardi Gras heroes, hospital heroes, and coming out heroes; our heroes were big brothers, big sisters, mums, dads, and favourite uncles.  Frequent themes were LGBTI weddings, survivals from gay bashings, abusive childhoods, and school bullying.  We had wartime heroes, guardian angels, queer comic book characters, myths and legends, tragic poets, a politician or two, and lashings of wonderful humour.  We enjoyed the full gamut of queer experience, from  laughter and fun,  to tears and tragedy.

To those not selected this year we urge you to keep writing, try again next year, and be very proud of your efforts.

In judging we looked for originality, great writing, interesting structure, a story that went somewhere complete in 750 words, perhaps a great ending, and a lot of heart. We loved stories that avoided heroic stereotypes …but mostly, we wanted  that indefinable WOW factor that puts a smile on a judge’s face!

The stories selected we feel ticked all our boxes.